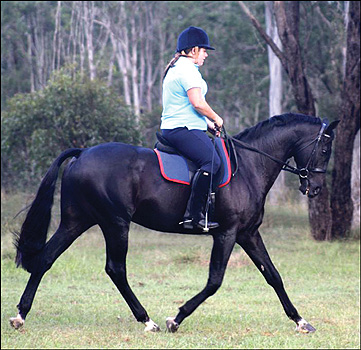 Frozen Semen
A limited amount of frozen semen is available for sale at the fee of $880.
See our Contracts for conditions. 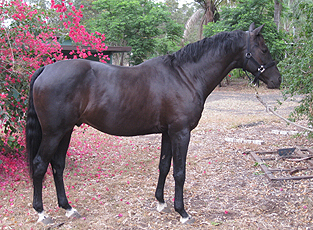 Splashdance video Footage taken Oct 2010.
Just off the transport truck from QLD and strutting his stuff in the rain! Press play to start the video.

Striking under saddle with natural collection, quality and presence.
Big and athletic, super soft to ride, true snaffle mouth, naturally balanced, easy extensions and outstanding agility, with the kind of canter you want to ride on all day. His breaker described him as a "Ferrari".
Great willingness, bold across country, calm under pressure and a super cool attitude that will change your mind about Thoroughbreds. Absolutely no cold back. A real people horse.

All of this comes naturally, indicating a strong genetic heritage which he passes on to progeny.

Splashdance has been shown in 2008 by his breeders for Champion ANSA Mt Gravatt Show QLD.


Progeny of Splash have won at ASH Futurities (led and under saddle), in working classes, ASH hack and open hack classes, showjumping and are also successfully competing in eventing, dressage and polo. They have been used for mustering and in feed lots, as well as general leisure and farm work riding.

Inbred to Hyperion. Combines bloodlines of Tudor Melody, Blue Peter, Alycidon and Coeur Volant. The dam of Ross is a full sister to Ribot. The Tudor Melody line has been used previously at Chalani in the polo pony line of Dunwell Tudor Tinker, through Fintona Artist. Silver Laird was campaigned for four years and competed at 40 shows in South East Qld, both led and under saddle. He was noted for his unflappable temperament. After his big wins at Brisbane Royal 1996 he was retired.

Dam: A Riot In Paris

Combines bloodlines of Pipe Of Peace and Midstream. This cross has produced Drawn, renowned sire of polo ponies for the Haydon family. Midstream blood features in Australia's greatest polocrosse sire Edenhope Sam. Even Song is a daughter of one of Australia's greatest mares, Melbourne Cup winner Evening Peal. Romanda crossed with the Rannock line produced for the Gowers the successful and very attractive ASH and dressage horse Chalani Midspin.

"He had the balance right from the start. The others of that line I have broken in are exactly the same. They don't hang in around corners, they are correct straight ahead sorts. I galloped him to 3/4 pace and you just ask him up a couple of strides and he stays at that pace until you kick him up some more. And he calms right down and you can throw the reins away.

It is too easy to forget he is a young horse because everything he does so kindly. He is very comfortable. I have never ridden a young horse with such natural balance. It is like driving a Ferrari - he doesn't lift, he drops behind and drives on. You don't get too many like him." 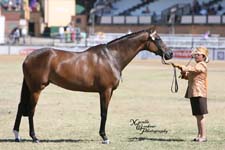 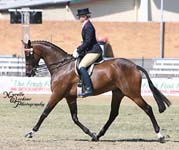