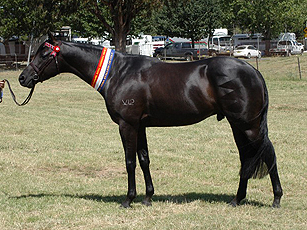 Chalani Tempo was sold to Janita Edwards of Kiah Glenn Stud (SA) when he was still on his mother.

Janita has had much success with Tempo, showing him at Royal, State and National level in ASH and ANSA competition for Champions, Supremes and Futurity wins in several states.

Tempo has had a stint of mustering and cattle work in the Northern Territory on Mt Sanford Station with Brent and Kelsey Stevenson, culminating in a score of 83 in the Novice draft at Timber Creek Campdraft (his second campdraft).

Tempo was shown at the ASHS National Show in March 2017 for Reserve Champion Led 4yo and wins and second placings in hack and working classes. A very good looking horse, Tempo commenced stud duties in 2015.