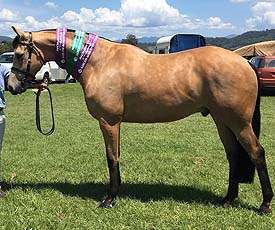 Tussock has been successfully shown in the 2016/2017 show season in ASH and Show Hunter galloway competition, qualifying for Adelaide Royal 2017.

He was gelded as a 2yo and is the sire of one foal, Chalani Card Tricks. He is now owned by Tanya Stuart in NSW.